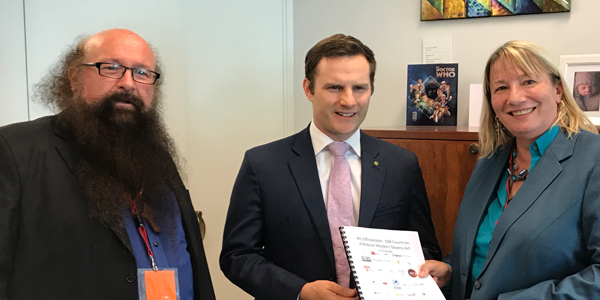 Anti-slavery coalition Stop The Taffik Australia have presented a petition to the Assistant Minister for Home Affairs Alex Hawke.

The petition featured 40,099 signatures from 168 countries and calls for Modern Slavery legislation.

Mr Hawke has announced that the Turnbull Government will introduce Modern Slavery legislation “during the first half of this year.” Mr Hawke also pledged to enact this legislation by the end of 2018, and to ensure an even playing field for Australian businesses to comply.

Stop the Traffik’s Carolyn Kitto told Insights that Assistant Minister Hawke, “made some announcements which we were encouraged by.” She added, however, that Stop The Traffik wanted the final legislation to feature penalties for companies that failed to report or who gave false reports about their supply chains.

“We’re not saying there should be penalties for if they find (evidence of slavery in their supply chains),” Ms Kitto said.

Stop The Traffik also want to see the legislation to establish an independent antislavery commissioner, a measure that has been endorsed by Labor and the Greens but has yet to be announced by the Turnbull Government.

Ms Kitto says Stop The Traffik will continue to campaign for these measures as the legislation is prepared and “well and truly on the agenda.”

Stop The Traffik is offering a workshop for businesses and entities needing to get ready for the Modern Slavery Act. More details and registration can be found here.

The petition was circulated by the Be Slave Free Network, Freedom United, and the Stop The Traffik Australian Coalition.

1 thought on “Stop The Traffik Encouraged By Modern Slavery Legislation”