Leading with creativity and hope 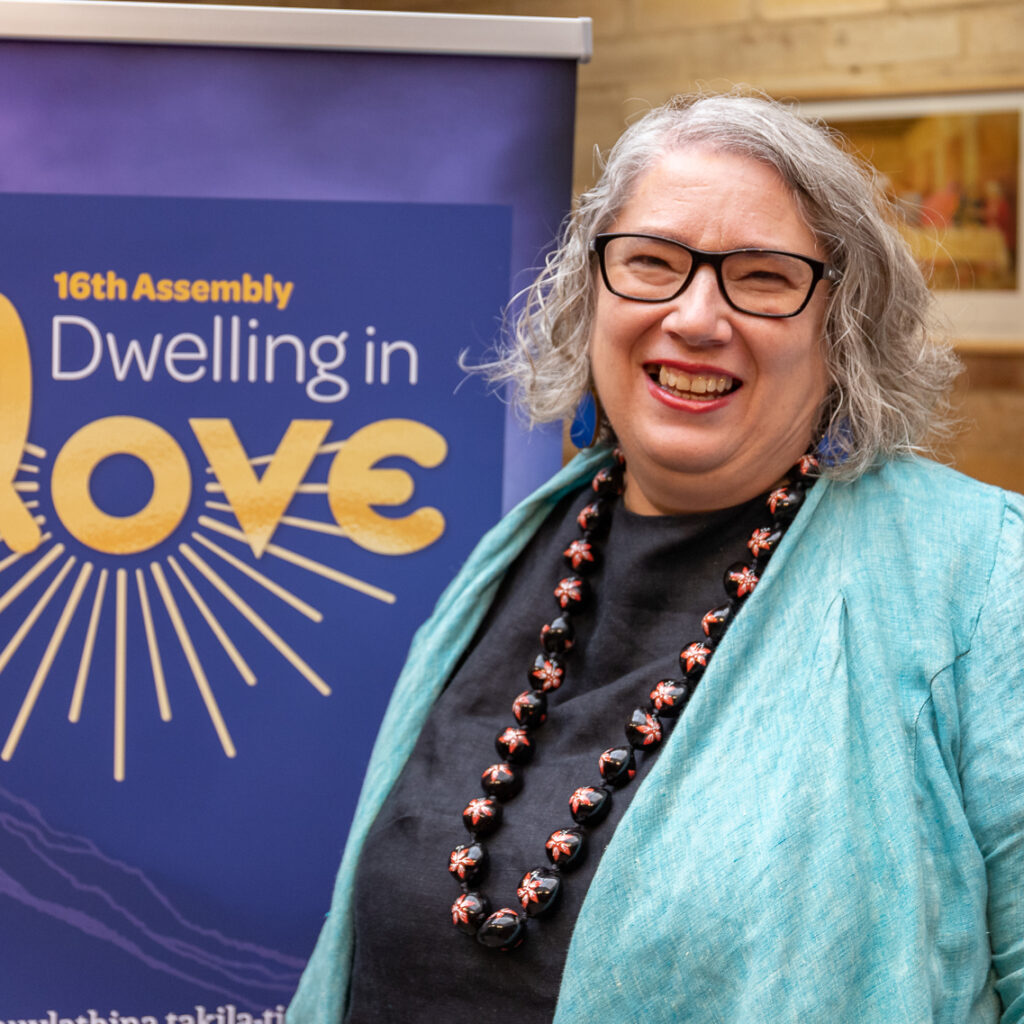 When Rev. Sharon Hollis was named President-elect of the Uniting Church in Australia, the world was a different place.

It was pre-COVID-19. Before mandatory check-ins, the ubiquitous hand sanitiser, the mask-wearing emoji and we all got used to working from home.

On 17 July, Sharon will be installed as President of the UCA, the third women to hold the post and the first ordained woman in the role.

However, she will do so in a global context no one might have predicted.

Even beyond COVID-19, there are many changing circumstances in our society and in our church which have left many of us asking, what is the future of the Uniting Church?

Some might say a daunting task lies ahead for Sharon to lead the Church through this pivotal time of self-reflection and change.

But if there is one theme that is constant in Sharon’s life, it has been change. She has lived it, led people through it and relishes the kind of big picture thinking needed to reimagine what might be.

Sharon comes to the role having served in the Uniting Church from a number of interesting perspectives – she was Moderator of the Synod of Victoria and Tasmania from 2016-19 and has been a ministry educator and congregational leader.

Formed by the Uniting Church

As a young person, her identity was formed within and by the Uniting Church, and those experiences have shaped the hopes she carries for the Church going forward.

When she was eight, Sharon’s family moved to Keilor Park under the flightpath of Melbourne’s Tullamarine Airport. It was a hub of cultures and languages of largely European migrants.

“We lived on a street with over 100 houses and there were only two English-speaking families. There were people from Hungary, Germany, Malta, Italy and Greece.”

“It struck me when we moved to the country how I’d really taken that for granted. It wasn’t something that was celebrated like we celebrate multiculturalism today, but you would hear different languages coming out of your neighbour’s backyards and smell different foods.”

“I guess I grew up thinking it’s possible to live alongside people who aren’t like you.”

At 13, she moved to her mother’s home town of Finley, a small town in the Riverina region of NSW where she finished her schooling. Moving back to Melbourne to begin an Arts Degree at Monash University opened a new world.

“My horizons expanded beyond anything I’d ever known, both socially and culturally, but particularly intellectually. I did a subject on how women are portrayed in Australian history, and I became a feminist. It gave me a sense that learning can change you and can give you real insight and power.”

It was also a formative time for her identity as a Christian.

Engaging in social justice from a faith perspective

“It was probably my first exposure to how negatively some people view the Church. I had to work out what it meant to engage in social justice from a faith perspective. When that wasn’t the motivating factor for most people, how do you make peace with that in yourself?”

A key mentor for Sharon at the time was Rev. Jim Murray, the minister at Monash Uniting Church.

“He helped me understand that if your faith was to have any integrity, it had to be embedded in committed action in the world.”

Not long after university, Sharon discerned a call to ministry. She describes her life as an ordained minister as an honour and privilege.

“To be able to preach every week, open up scripture and help people see the way of God in that; to accompany people through major life transitions and to be with people in the darkest of moments; just to be able to encounter people at depth, is really rewarding.”

In her first congregational placement, Sharon was called to a congregation that was approaching the end of its life.

“He helped me understand that if your faith was to have any integrity, it had to be embedded in committed action in the world.”

Eighteen months into the placement, when all avenues for survival were exhausted, the congregation voted to close and gave themselves 18 months to prepare.

“I have such high regard for that congregation. They didn’t fight it. They just said, right, ‘Let’s work out the best way to do this.’”

“When we all met a year later, they all looked at me and said, ‘Oh, we should have done it earlier. It’s been so fantastic. They’ve been so welcoming.’”

Sharon is still full of admiration for the mature approach of the community.

“They were able to find new life because they ended the old one. It might not have emerged in the same way if they hadn’t been willing to say, this congregation’s life is ending.”

“It was a very hopeful and faithful experience.”

Hope in the darkest moments

Sharon has also found hope in the darkest moments of her own life.

Nearly eight years ago, Sharon lost her beloved partner Michael to suicide. They were married for 19 years. At the time of his death, Sharon says she pulled on all her intellectual knowledge of grief and loss, but that didn’t make it easy.

“People say, ‘I don’t know how you keep going’ but you don’t get a lot of choice. I had two daughters and I had to get up every day and at least make their lunch and pack them off to school.”

“I said to myself, this can either break me or it can break me open and I want to choose to be broken open by it. And I hope it’s made me a better, wiser, more compassionate person.”

“I still miss him all the time. I’m still deeply grateful for having known him. He had a great capacity to be supportive and encouraging and I still feel the legacy of that all the time.”

A key project during Sharon’s term as President is to help lead the Assembly’s Act2 conversation – a process of discernment about where God is calling the Church into the future.

Sharon says this may mean sitting in the uncomfortable space between endings and new beginnings.

“I think we need those courageous conversations about the way we do things. Is this way of being or structure or project helping us be the community we want to be?”

“That takes a lot of discernment and being willing to listen to each other, and to own our sadness when we need to let go.”

How is God calling the Church into the future?

For Sharon, the future conversation is also about hope.

“One of the phrases that has stuck with me from the Act2 conversation is the end goal of ‘life-giving communities of faith’.”

Sharon hopes the Act2 project will inspire us to be more creative in thinking about what a community of faith looks like, whether it’s online, face-to-face or gathered for a short time, and to rethink the ways the Uniting Church is engaged in the world.

“What life-giving communities of faith do is help people notice and see where God is in the world and equip them to participate in that.”

For Sharon, how the Uniting Church engages in the public space unequivocally starts with how we as a Church and as a nation come to terms with the dispossession of Australia’s First Peoples and the continuing privilege most of us have because of it.

“Our First People have gifted us with the Statement from the Heart, and the generosity in that continues to stagger me. That a people dispossessed by us would come back and say they would like to have another go to set this right.”

“I think if we miss that opportunity, it’s catastrophic for us as a nation.”

“Our own Preamble is a beginning, but we still have a long way to go to live into that and really work out what it means.”

At the 16th Assembly online meeting in July, Sharon has invited First Nations students from Nungalinya College to lead the Bible Study.

“I’m intrigued and really glad we’ve got this opportunity to hear those leaders open scripture for us and to hear what they want to say to us about what it means to live together in love and what that demands of us as Second Peoples.”

Another way Sharon hopes the 16th Assembly will help the Church think differently is the intentional use of different languages to communicate the theme “Dwelling in Love”.

“We have to keep reminding ourselves that we are a multilingual church. We all speak many languages and those languages have embedded in them meaning and culture.”

“I hope it prompts people to find someone who speaks another language and ask them how they draw out different meaning when they read it.”

Sharon is also aware that stepping into the role of President requires switching her own perspective from a Synod lens to a national perspective.

“I have belonged and worked in the Synod of Victoria and Tasmania for nearly 30 years. It’s a part of my life I’ve always been involved in. There’s a little bit of grief in that part of my life coming to an end, but I am also looking forward to seeing the future of the UCA from all of the unique and diverse perspectives that we have across our Church.”

Whatever lies ahead, change is certain. Sharon will no doubt lead with creativity, energy, resilience and hope.

The 16th Assembly meeting will take place online from 17-18 July 2021. Rev. Sharon Hollis’ induction will be livestreamed from 11.30am on Saturday as well as the rest of the meeting here.