Florence Foster Jenkins was a real woman whose noteworthy story could be tackled in a variety of ways, by different movies. That probably explains why Jenkins is the subject of two different movies which both have been released this same year. Hollywood production Florence Foster Jenkins and French film Marguerite are now showing at Australian cinemas.

Jenkins was a New York heiress who, during the ’30s and ’40s, was a huge supporter of that city’s musical community. Her generous contributions were essential for the advancement of the arts in a particularly difficult financial time in history. Her love of music began during childhood when she was a fine pianist (she even had an audience with the President of the United States). Due to an accident, though, Jenkins no longer was able to play. But her love of music did not diminish, but she was relegated to experience it from the auditorium seats.

With the support of her husband, St Clair Bayfield, she took lessons to sing opera and occasionally preformed before her friends and family. This loving community allowed her to believe in the dream of one day performing before a live audience … despite the evident fact that she had an horrendous singing voice. And then, on a whim, she takes the time to record herself. Through this ear-catching event, an opportunity presents itself for her to sing at the world-famous Carnegie Hall.

Director Stephen Frears’ (The Queen) interpretation of Jenkins’ memorable life develops the unique relationship between the tragic but endearing heiress (Meryl Streep) and her doting husband (Hugh Grant). What is most strongly showed is their life of delusion, which seems to be satisfying to them both for a time. This biographical sketch shows that regardless of the positive intentions behind their actions or the agreements which led to their “unique” lifestyle, these distortions of the truth begin to cause the fabric of their lives to unravel with Florence’s desire to sing in public.

Seasoned director Frears keeps his version relegated to a small ensemble of Streep, Hughes and Simon Helberg (The Big Bang Theory), who portrays the ill-fated accompanist for Florence. Trears’ direction manages to honour Florence and all that led to her infamous concert in New York City. This eccentric tale provides a myriad of quirky experiences and characters that give way to a comical, but fateful memoir of this unique woman. Streep gives a strong performance but, ultimately, the surrounding cast and writing leaves the story without much heart. Florence Foster Jenkins has so much potential for captivating the audience, but fails to fully encapsulate this uncommonly charming tale. 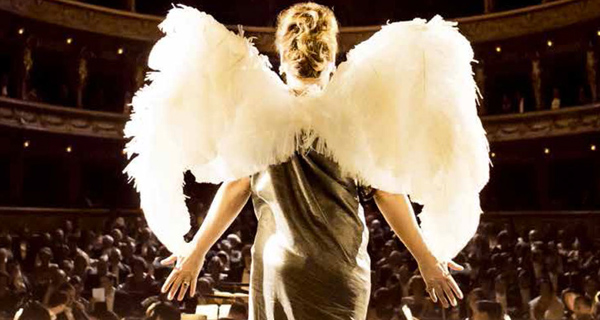 Marguerite is filmed in a different time and place to the original story of Florence Foster Jenkins. The direction and writing of Xavier Giannoli (Superstar) take the essence of Jenkins’ story and places it in 1920s France. Catherine Frot (Haute Cuisine) beautifully encapsulates the role of the heiress and shows the actual motivation for her pursuit of music, which was to regain the love of her husband, Georges Dumount (André Marcon).

In the tradition of European cinema, Giannoli magnifies the tragic side of the heiress’ life by taking a darker path than Frears’ Florence Foster Jenkins. The script provides for a richer ensemble of supporting characters and story elements. Giannoli’s direction manages to take an exceptionally sad story and turn it into something irresistible. Also, his writing should be celebrated for delivering a colourful cast of characters which provide the conniving community that surrounds the dream world of Marguerite. Yet, it is the captivating performance of Catherine Frot that becomes the differentiating factor between the two films about Florence Foster Jenkins. Frot reveals the disastrous side of the world of this music fan, without losing her primary motivation of winning back her husband’s heart. Marguerite is a darker rendition of Jenkins’ story, but the combination of superb writing and acting make this version more appealing.

In this era, it is hard to imagine that anyone could out perform Streep. But Frot shows it can be done, primarily because she has been given a better script and direction.

Both films will entertain and Marguerite may be more difficult to find than Florence Foster Jenkins. But for the adventurous cinema-goer, it will be worth trying to track down this wonderful film.

What are some of the bigger questions to consider from these films?

In this era of re-defining marriage, both of these films show the tragic side of infidelity and the lengths that people will go to regain the love of a spouse. God does have a very specific view on the marriage relationship and these films accentuate the deep meaning of the roles of husbands and wives. God has provided a rich, beautiful and fulfilling model for us to follow.

PrevPreviousA budget of missed opportunities
NextOutspoken or over the top?Next