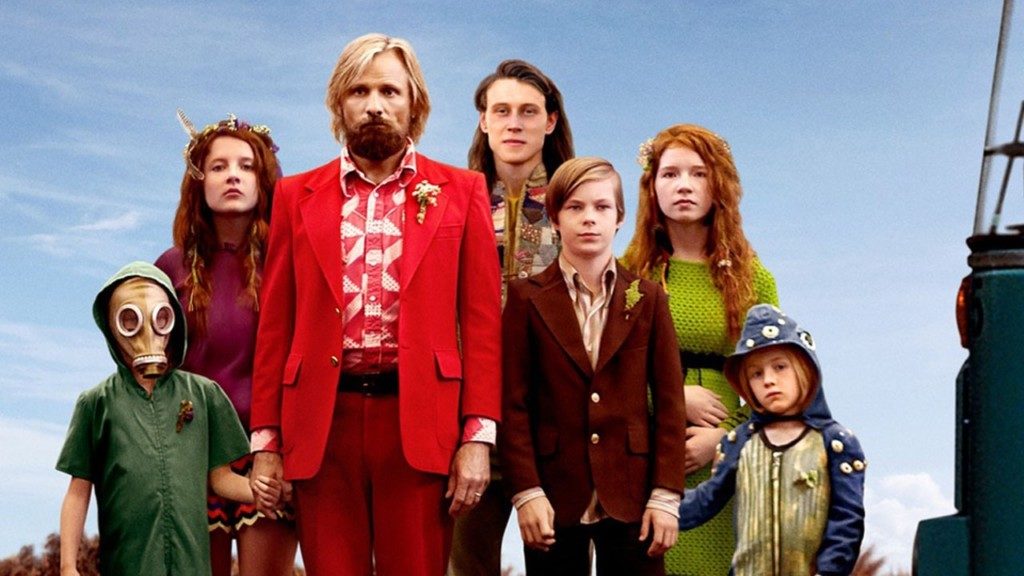 What if we left the concrete jungle with all its stress, road rage and money woes, for a life among the lush green and chirping birds? We’ve all thought about it. Just a quick getaway but for the Cash family in Captain Fantastic, it was a more permanent decision.

Deep in the Oregon wilderness, the family live a dynamic and technology free existence filled with music, reading and thought-provoking conversation.

Viggo Mortensen (Lord of the Rings) delivers a striking performance as father of six, Ben Cash. Following the sudden death of their mother Leslie, the Cash family had to learn how to deal with the hurt, anger and confusion of losing her.

To attend their mother’s funeral, Ben loads his family in their very own make-shift school bus and drives them back into outside world. Once they arrive, Ben is met with contempt and criticism from his father-in-law Jack, played by Frank Langella. Jack blames Ben for the death of Leslie, a sentiment later shared by Ben’s own son and middle child Rellian. The criticism from his in-laws and the loss of his wife, challenges Ben to rethink the way he is raising his children.

As the film progresses it showcases how the unconventional lifestyle enabled the children to have an intellect beyond their years and be physically strong. Their lifestyle is based on the idea of allowing the freedom of mind and body. Something that Ben believes is constricted by the constructs of societal norms and rules. Before she died Leslie wrote that her children were becoming philosopher kings.

Despite this, the children’s isolation hinders their ability to socialize. You can’t help but cringe when the oldest sibling Bodevin tries to talk to girls or laugh at their reactions from seeing a video game for the first time.

Director Matt Ross explores the question every parent faces and one that Ben grapples with. What if all you’re doing to help your children is ruining them in the process?

A stand out scene is when Rellian quotes a few lines from Noam Chomsky.

“If you assume there is no hope, you guarantee that there will be no hope…” he said.

That hope and faith in each other is what helps them heal and ultimately forgive.

Captain Fantastic takes you on a heart-warming journey of a family’s bond. The film is the right mix of humour and drama that keeps audiences intrigued throughout.

Winning accolades at both the Cannes Film Festival and Palm Springs International Film Festival, it’s definitely worth a watch.

What does the bible say about dealing with loss? (2 Corinthians 1:3-4).

Questions surrounding the beliefs in Christianity are interestingly featured in this film. Ben struggles with the idea of believing in God instead choosing to believe in people, particularly Noam Chomksy.

It’s a classic example of looking at action and not necessarily looking beyond, to the reason why that action is even possible. Maybe the real leap of faith is being able to believe in what you can’t see. Would love to hear your thoughts on this point!