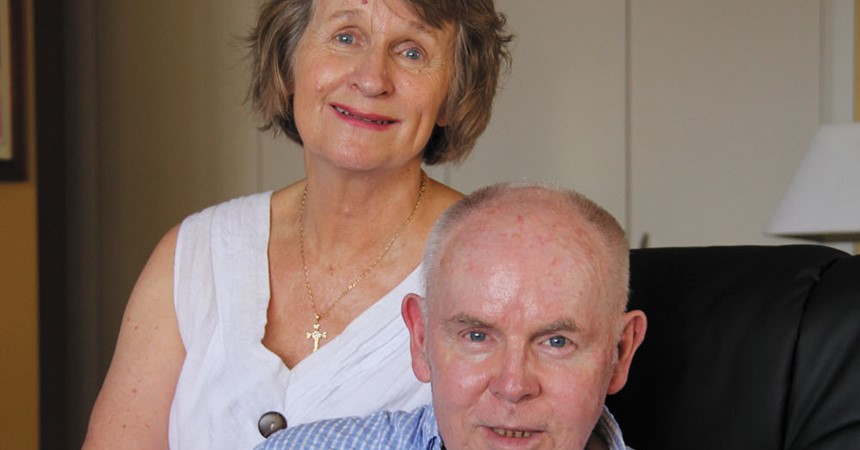 Christine and Warren Sheppard’s long inter-church marriage was characterised by generosity and a desire to learn from each other.

Rev. Christine Sheppard is a recently retired Uniting Church minister. In 1987, she became the first woman from the Hunter region to be ordained.

Her late husband Warren passed away on 14 July after a “courageous, long battle with Parkinson’s disease.” He remained Catholic his entire life and worked as a pastoral assistant in his local parish.

Their long marriage, itself an unusual symbol of Christian unity, was characterised by Rev. Sheppard as an “interchurch dance.” It would also be the catalyst for relationship-building in their local area between multiple denominations.

Rev. Dr Rod Pattenden is the minister at Adamstown Uniting Church. He knew the couple well.

He told Insights that the Sheppard’s marriage was “an unusual ecumenical marriage and relationship” that served to “bring the churches together in the region.”

“Christine and Warren were regulars at our evening service over about eight years,” he said.

Rev. Dr Pattendon said during this time, Warren’s faith was one that he displayed in, “A lived and compassionate way.”

“These days it doesn’t matter what brand you are, but…no doubt early on it was quite unusual,” he said.

“They were great pathfinders.”

“The two of them did a lot with humanising what the ecumenical relationships were in the Hunter Newcastle region.”

Gough Whitlam and the Virgin Mary

The couple first met in 1974 while on holidays. They shared a memorable first conversation.

“We were both Primary School teachers,” Rev. Sheppard recalled.

“Warren was in Newcastle and I was in Coonabarabran. We used to say we met “In a conversation about Gough Whitlam and the Virgin Mary-of course not necessarily together!””

The theme of Religion and Politics would be constant themes in their conversations over the years.

They were married in a Catholic Church at Merewether Beach, by two Catholic Priests and a Methodist Minister.

From 1984 to 1986, both completed their Bachelor of Theology Degrees, with Rev. Sheppard studying at United Theological College.

“Warren’s degree [was] mainly at Catholic Theological Union, Hunters Hill, but also at UTC,” she said.

“He became a Pastoral Associate in Hospital, Hospice, and Parish.”

“Our beautiful daughter, Sarah, who was born in Coonabarabran, also lived an Interchurch life and was baptised in the local Catholic Church by our Priest and our Uniting Church Minister.”

Rev. Sheppard said that this was all made possible by her long-held openness towards Catholicism. This, she recalled, dated back to 1965, when her dad joined the local St Vincent de Paul, post-Vatican ll.

Despite being from different traditions, Rev. Sheppard said the only challenge in the journey was not being able to share Eucharist.

“I had come to faith in a Methodist Communion Service and remain passionate about Eucharist. I thank God for the Eucharistic hospitality of Newcastle Anglican Diocese and that eased the pain,” she said.

“From 2001, I have been able to receive Communion in this Catholic Diocese of Maitland Newcastle as a member of an Interchurch family, and we continued to attend Mass, as well as Uniting Church and Anglican congregations. I continue to worship in the three churches.”

“What can we learn from each other?”

In 2017, the couple spoke to Catholic website MNNews about Mr Sheppard’s diagnosis with Parkinson’s disease. Again, the ecumenical nature of their marriage was evident in the interview, which went into the diagnosis, their life together, and shared faith.

“As a carer, it is tough, and she has a small group of Christian friends who pray for her and listen to her,” Mr Sheppard said at the time.

“With me, she prays the divine office aloud daily. She is a ‘fan’ of St Mary MacKillop and seeks her prayers also. When the opportunity arises, we go to the place of Mary MacKillop’s tomb at North Sydney for prayer.

“She is regularly inspired by the Gospel of John, chapter 1, which describes  the coming of the Word, especially verse 14, “And the Word became flesh  and lived [or set his tent] among us, and we have seen his glory as of a father’s only son, full of grace and truth.”

For the last 14 months of his life, Mr Sheppard was ministered to by Uniting, Anglican, and Catholic Churches, as well as the Salvation Army Aged Care facilities.

He passed away on 14 July at the age of 71. Warren’s funeral in their Parish church had four Catholic priests, Rev. Dr Rod Pattenden, as Preacher, and other denominations involved.

“His Requiem Mass probably showed…the Interchurch dance of Warren and I,  since we met in 1974,” Rev. Sheppard said.

Rev. Sheppard said the main blessing she took away from the experience “…come from living a pilgrimage that asks, “What can we learn from each other?” Not “How can we change each other?””

PrevPreviousUniting Church to participate in Interfaith service for International Day of Peace
NextThese Aussie teens have launched a landmark climate case against the government. Win or lose, it’ll make a differenceNext

1 thought on “An inter-church dance”