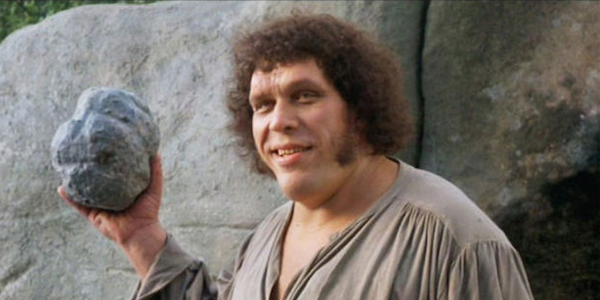 From his time as pro wrestling’s biggest star to his role as Fezzik in the classic family film The Princess Bride, Andre Roussimoff holds a rare place in many people’s imaginations. On the 25th anniversary of his death, HBO Sports has released a documentary plotting his amazing life. A revealing and incisive piece, it gives a rare look into the life of a giant.

Andre grew up in the rural town of Grenoble, France. One of his neighbours was the playwright Samuel Beckett, who went on to write absurdist classics like Waiting for Godot. Discovered during a chance encounter with some local wrestlers, he entered the ring at the age of 17.

Nicknamed Andre the Giant by promoter Vince McMahon Sr., he became the biggest star (literally and figuratively) of wrestling’s territory days. In order to keep Andre’s aura and special attraction status, McMahon shared him with several other promoters around the world, something that led to him becoming a legendary figure but also ensured that he had a grueling schedule, wrestling everywhere from Australia to Japan, 300 days a year. Andre was popular backstage and among fans, which directly led to roles and television and film, the role of Fezzik being written for him. He was also known for being a fun presence at nightly parties. On one occasion, Ric Flar recalls Andre downing 106 beers in one sitting.

For all of the fun, there was a dark side to Andre’s life. The Acromegaly that made Andre over seven foot tall also threatened his life. Knowing that he would die young, his legendary partying was a way to block out pain. Standing out as he did, he also never had privacy in airports, a factor that bothered him immensely. Aware of the power his size gave him, he could be legitimately difficult on his opponents, his willingness to work with them tied to how much he liked them personally.

The access that the filmmakers managed to gain is unparalleled. Billy Chrystal, Robin Wright and Vince McMahon are among those offering up their insights. The film also features interviews with Andre’s siblings and his daughter, whose stories have seldom been shared before. The interviews are spliced with previously unseen backstage footage from Andre’s career.

No documentary is perfect, and for all of the ground that HBO cover, there are some areas that have been neglected. While the desire to be positive about Andre is understandable, the documentary completely skips over his alleged racism towards Bad News Brown. Given that Brown spoke about this on a shoot interview shortly before his death, the material is there and could be drawn upon to provide a deeper understanding of the man in all of his imperfections (Andre and Brown reconciled after the event).

Andre’s Acromegaly led to his 1993 death. Doctors have suggested that it could have been treatable. While it was what led to him being a special attraction, it limited his life in a number of other ways. Andre believed that God wanted him to be his size, and turned down treatment. This simplistic theology is something that is worth critiquing as leading to someone not enjoying life in abundance.