A downward slope for UCA?

The following is an excerpt of an essay submitted by retired UCA minister Dr. Bernard Thorogood you can read it in full here.

A knowledgeable commentator on radio, Keith Suter, has put out a piece on the decline of the Uniting Church and the likely collapse. This set me wondering about the strengths and weaknesses of the UCA. My thesis is that one way to measure the start of considerable numerical decline is the date when we ceased taking church membership seriously.

It was, in all our Protestant traditions, a serious and challenging moment when you were accepted as a fully responsible communicant member. It set us apart from national and ethnic churches where, after infant baptism you were assured to be on the general path to Confirmation and Communion, just by being a citizen. With us you joined as a member because this was the calling of Christ, and so you accepted the central beliefs and the moral disciplines of the community. The local church kept a record of its membership; it was not a light or casual thing. It was sometimes referred to as a Covenant Fellowship.

Membership as a formal status was left behind. At the same period we ceased to fulfil our baptismal commitments.  The thinking at that time was all for inclusion. We were a welcoming community, respecting all who would come, without differentiation. That was not at all a bad intention. Christ welcomes all. Yet it was an emphatic loosening of the ties which held us together. As we were liberal in our attitude towards confirmation and membership, so we were liberal in theology. I question whether it is possible to build a strong institution with such a basis.

We might respond that the great purpose is not to create strong institutions but to witness to the spirit of Christ, and that perhaps we have got closer to that aim than some more prosperous denominations. That is entirely possible. It is not for us to judge. But we cannot then be surprised if the Uniting Church is seen to be in decline.

To maintain a strong church through generations and through this intensely competitive, secular society requires clarity and simplicity in its belief. It is a structure which is both effective and light, and a challenging discipline of life and worship.

The Uniting Church set out with a statement of belief in its Basis of Union. This was a thoroughly considered, Reformed, classicality-based and intellectually open document. It gave authority to Scripture and also held open the continuing process of interpretation. This good but wordy statement did not become in any way a test of membership; no one other than ministers at their ordination had to subscribe to it. It was not taught regularly from the pulpit. Most worshipers knew little of it. So it was sometimes said “You can believe anything you like in the Uniting Church.” Thus we surrendered one of the keys to a strong, stable, durable body.

In seeking honesty we cannot be so curt. No short form of words can contain it all. We are limited in knowledge, vision and language. The Nicene Creed, often taken as the ecumenical best chance of unity, does not say one word about the ministry of Christ; it jumps from miraculous birth to death and resurrection. But should we not try in our time and our fellowship, so that all of us could unite in a statement of faith to be used regularly in worship? My own poor attempt at such a statement is appended.

“Easy come and easy go” would be a poor motto for any substantial institution. We do not mark entry with any clarity, although baptism and confirmation could be very significant milestones in a personal faith journey. We do not hold to a tithing custom for our giving to the church, or anything approaching that. We do not ask that members regard attendance at worship as a top priority in their lives. In fact we hold to Membership Lite. The result is that most congregations depend on a small core of devoted people who offer themselves for service because of personal conviction, or delight in the fellowship, or the nourishment of their spiritual life. They are tireless but aging, for they were shaped by their family in their childhood when Sunday School and Youth Group was a common experience. There are few successors.

The challenge of Christ to “Follow Me” was radical and risky. It was to call people to a journey on a bumpy road where old habit or tradition could not protect you and the authorities were eager to take you down. There is no way to transfer the first century milieu into our present day; we cannot ignore two thousand years of human development.

But is there not a real challenge in discipleship? Are we too easily assimilated into the consumerist environment?

Should we not challenge policies which deny human solidarity and tend to racism? Too often the church has been on the side of conservative, military and dictatorial regimes, a position which does not reflect the way of Christ.

In practice we do not accept a churchly authority; congregations can happily disagree with a General Assembly decision or fumble their way around it. We live with conscience as king. This may be a splendid philosophy but it does riot build a strong institution based on a sure, agreed faith.

The Uniting Church, both by original intent and by personal conviction through the years, has chosen not be strong on those institutional factors. It was, in a sense, born to fade away. There was a hope for further unions but these came to nothing as no partner could be found. There was joy in the many ethnic groups which brought their fresh vitality to the fellowship. We have consistently taken a public stand for social justice. But we failed to draw succeeding generations, lacking the strong, simple, demanding, whole-life challenge that drew us as teenagers, and so have relied on an ageing membership. Perhaps we have been too timid or too comfortable. 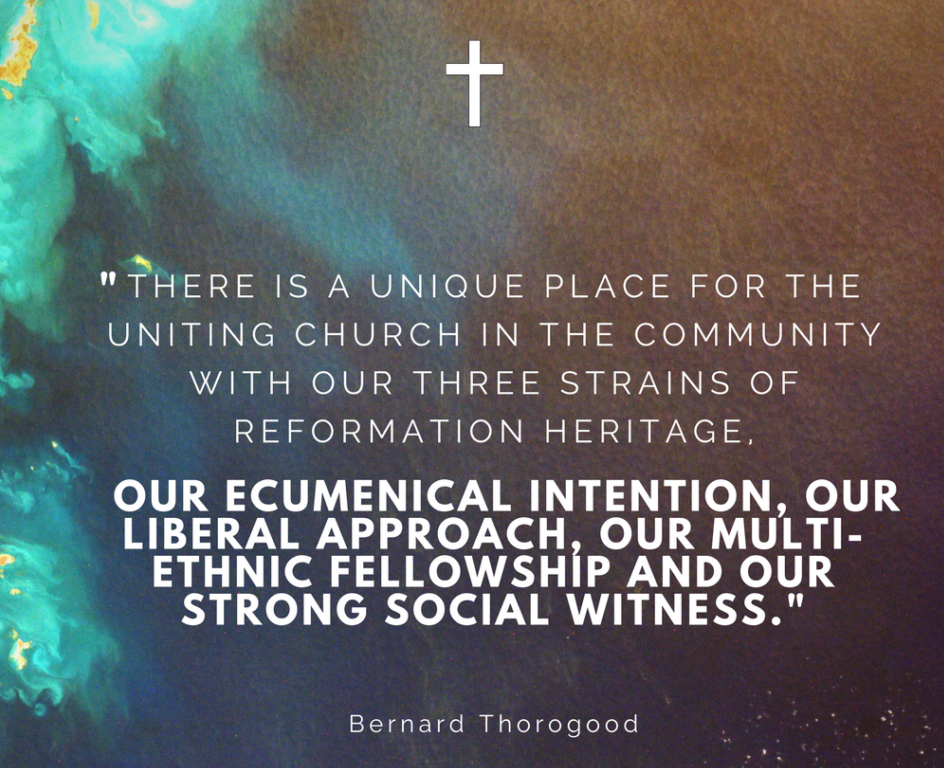 Suppose the Synod asked every congregation to write a one page statement on where and what it realistically expects to be in ten years’ time. Would that challenge our church councils?

Any planning for the future shape of the church needs to bold and radical, not dominated by the accountants (who have their role but not always a vision for the Kingdom of God), and engaging the talents of all.

We need sensitivity to the pain that older members feel when any radical change is suggested. Many have given life service in a congregation. In some cases they know it is a diminishing community but they continue to make personal sacrifices to keep it going. So no local church should be closed down without the fullest thought, prayer, discussion of possible alternatives and careful planning. The fact that the Synod is the legal owner of the local church property should not be determinative; every congregation regards the local church as theirs.

We need to learn from those of our congregations which are strong and growing. We thank God for them. What are the factors that have been influential for them? Do they indicate a way to follow? Have we listened enough to our Korean, Chinese and Pacific Islander congregations?

It is not realistic to think of copying “successful” popular churches, either those with elaborate ritual, classical liturgy and trained choirs, or those with shouting, swaying enthusiasm. We can only be ourselves. There is a unique place for the Uniting Church in the community with our three strains of Reformation heritage, our ecumenical intention, our liberal approach, our multi-ethnic fellowship and our strong social witness. It may be a small place but it is where we have been led, and it is a species of church which can enrich the universal fellowship.

I would urge the leadership of the Uniting Church to look anew at our intent to go on uniting. This is difficult at present when most churches are defensive and self-concerned, but unless we pursue the hopes of 1977 we have no clear institutional objective. We should look again at the Leuenberg Agreement of 1973 between the Lutheran and Reformed communlons, which opened up the possibility of intimate mutual acceptance. We could consider the UK union of the Churches of Christ with the United Reformed Church to see if there are signs there of a way forward. We should not give up the ecumenical calling.

Could we try to do something of that order in the new suburbs which are growing rapidly around our big cities? In the present social context there is a strong call for the denominations to be co-operative in the large new suburbs, for religious tribalism belongs to the past.

So, at this 40th birthday of the Uniting Church, we have to admit the decline in our numbers and social influence. We need to think realistically about our challenges, and rejoice in our present dedicated membership by strengthening the factors which hold us together. We need to seek fresh ways in which we can minister the word of God’s grace for our generation. We must cling to the rock, not to the rubble.