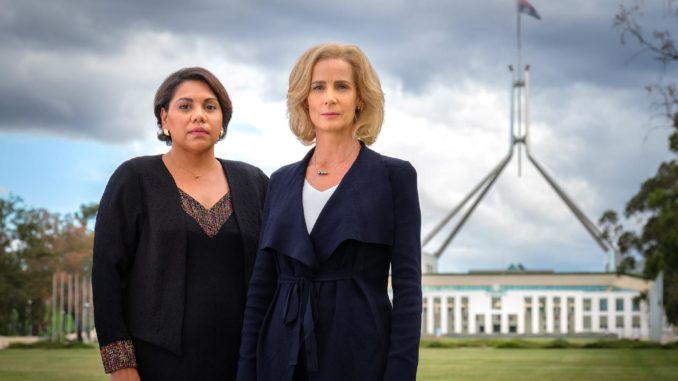 Viewers in need of a thought provoking show on a rainy day would do well to check out the ABC’s Total Control.

A gripping political drama, the show centres on Alex Irving, an indigenous woman and centrist politician who is courted by Liberal Prime Minister Rachel Anderson to fill a casual Senate vacancy. In exchange for helping seal a lease for a defence base on traditional land, Alex is promised whatever she wants for her local community. While never sure of who she can trust, Alex has genuine opportunities to achieve change, but has to act deftly at every point.

While the show does not announce any theological intent, Total Control explores sinfulness in interesting ways, both in terms of individuals’ sin as well as the corporate structures that reflect collective sin. As well as racism and environmental degradation, Alex needs to navigate a web of backstabbing, seediness, and people who are not as they present themselves.

Among other things, Total Control’s writing deserves praise for not settling for lazy stereotypes. Alex Irving wants to achieve great things for her community, but is not easily pigeonholed politically. Acts of betrayal, deception, racism, and misogyny are depicted as coming from all sides of politics, and very few characters are portrayed as caricatures.

This, it should be noted, extends to the show’s treatment of Christians, who are not portrayed as belonging exclusively to right or left. Faith is not a major show theme, but definitely pops up from time to time.

As per usual, Deborah Mailman delivers a powerful performance as the show’s lead. Rachel Griffiths is also strong as Prime Minister Rachel Anderson, a complex political animal who is as hard to read as she is to trust, yet has more going on than meets the eye. Harry Richardson portrays Alex’s chief of staff, Jonathan Cosgrove, another figure enmeshed in the scandal and intrigue of Canberra’s political culture, but who has complex motivations. Rob Collins stars as Alex’s brother Charlie, an activist and academic who clashes at points with his sister, yet ultimately wants many of the same things.

If any flaw can be found with the writing, it is that there are times when, after building for episodes and letting things breathe, huge changes in direction happen with seemingly no warning. Some developments feel rushed compared to the careful building that takes place early in the show.

As may be obvious, Total Control deals with some disturbing subject manner, and is impactful at points. Insights’ recommendation is qualified insofar as some viewers will no doubt struggle with its content.

While Insights hopes for a third season, season two finishes in such an impactful manner that it is not utterly necessary. In an election year, Total Control is timely viewing.