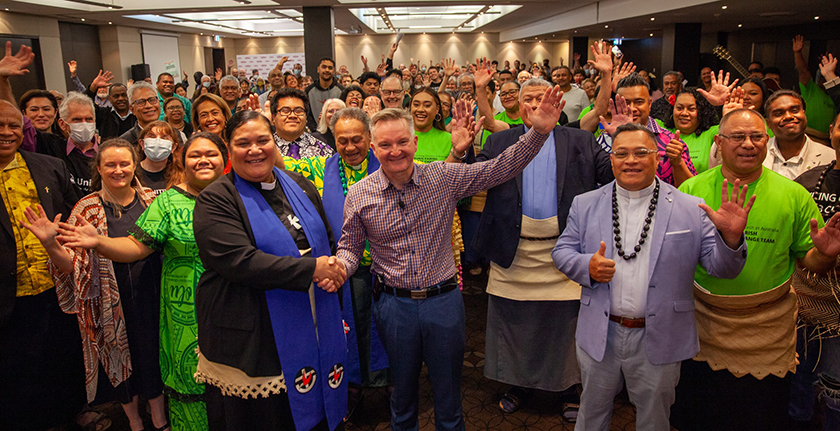 On Wednesday, 27 April, members of the Uniting Church gathered to call on political leaders to act on climate change, sharing their stories of how Pacifika people were affected by climate disasters.

He said that some political leaders had already given commitments to continue to meet on the issue.

Representatives of local congregations were in attendance as well as Samoan, Tongan, Tuvaluan, and Fijian representatives.

Chris Bowen, shadow minister for climate change and Energy was the guest.

“If elected, he will be very important for us”

Some empty chairs on the stage showed, “the other parties that weren’t here…but we want to open their chairs.”

Taking place at Penrith Panthers, the event was in the electorate of Lindsay, currently held by Liberal MP Melissa McIntosh. The local member was not present, however.

Less than a month to go before the election, the forum took place during a busy time in the life of the campaign, making it more difficult to obtain guests.

While Rev. Taumoepeau mentioned the need to gain bipartisan support, Mr Bowen gave the night its most partisan contribution. With no Liberal or Green representatives present, he was free to use the allocated five minutes to spruik the opposition’s climate policies.

Mr Bowen also answered questions from the audience. On climate change mitigation through Australia’s foreign policy, he noted that Australia had already committed to a climate change relief fund.

He noted an earlier pledge that an Albanese Labor government would increase aid to the pacific by $500 million.

Mr Bowen committed to report annually to parliament on climate change policy, as well as to meet once a year with representatives from the Uniting Church’s Pacifika community.

Mr Bowen noted that he was now three days officially clear of COVID and that it was his twelfth speech that day.

“The time for plain speaking is well and truly here,” Mr Bowen said.

“We in Australia have spent nine years arguing over whether or not climate change is real.”

“Government ministers argue with each other over (net zero).”

“We really have to strike with urgency.”

“We will say to our 200 biggest emitters you need to cut your emissions and put in place a policy framework.”

“Our system is not designed to cope.”

“We need to reduce the cost of electric vehicles.”

Mr Bowen noted the opposition, if elected, would bring in 400 community batteries and more solar banks.

He also announced that, if elected, an Albanese Labor Government would bid to host the COP meeting.

Climate change is expected to play a major role in the election, with several inner-city seat independent candidates running on platforms devoted to the issue.

Australia currently has an aspirational target to achieve net zero carbon emissions by 2050. The Government has also committed to reduce greenhouse gas emissions to 26–28 per cent below 2005 levels by 2030.

Prime Minister Scott Morrison has previously hit back at “internal and global” criticisms of Australia’s climate change policy. According to the Prime Minister, “Australia is doing our bit” and will reach its targets.

We are the body

Moderator elect Mata Havea Hiliau welcomed attendees to the forum and provided the theological input for the evening.

“Your presence tonight speaks volumes about our need to be here tonight.”

Rev. Havea Hilau noted that she was a Pacifika woman by birth who had experience of living in a place affected by climate disasters, as well as of extreme heat and drought.

“Climate justice is important,” she said.

“When one of us suffers, we are the body.”

“I want us to spare a thought for those who could not afford a fan, let alone air conditioning.”

“Part of our commitment as a church is to reduce our carbon emissions at every level.”

She also noted that the church had committed to lobby government to seek better climate policy.

The audience heard stories from Pacifika people who had personal experiences of climate change.

Rev James Bhagwan is the General Secretary of the Pacific Conference of Churches. Rev. Bhagwan sent a video message on behalf of the conference. He said that the conversation regarding climate change had shifted in the pacific.

“The conversation now in our region is slowly becoming one of relocation, of migration,” Rev. Bhagwan said.

He noted other issues including the rights of indigenous people, the roles of traditional leaders, and gender issues.

“The reality is, we consider a lack of political will from our largest neighbour…Australia,” he said.

“So the question is, how will you consider your role as a member of the Pacific family?”

The event was a joint effort between the NSW and ACT Synod, Uniting, and the Sydney Alliance.

For a full gallery of photos from the event visit the Synod of NSW and ACT Facebook Page.

The Federal election takes place on Saturday, 21 May.